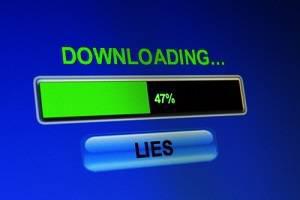 While fake news sites certainly present problems for Facebook users, Google users assume that the search engine is only going to bring up reliable results. When organizations that profit from dramatized content purchase ads, however, their sites are often pushed to the top of ranked results, making it almost impossible for users to tell the difference between what is real and what was simply bought.

Google’s AdSense—one of the advertising systems available to web publishers—has updated its policies to prohibit its customers from “deceptively presenting fake news articles as real.” The intent of the update, according to Google, was to stop Google-hosted ads from being placed on sites that are known to publish misleading content. So far, it is not working.

Media Matters for America issued a report this week showing that dozens of sites that promote fake stories still contain Google-hosted advertisements. The report comes on the heels of a Wall Street Journal finding that ads for Google’s own new smartphone continue to appear on deceptive websites. Google has insisted that the company is in the process of implementing the new policy but has not provided a timeline regarding when full implementation will be complete.

Despite the ongoing controversy over fake news, Google and other online media resources can allow your firm reach prospective clients quickly and efficiently, and we can help. At OVC, INC., we have been providing cutting-edge online marketing services to lawyers across the country since 2008. With our knowledge and experience, we can customize a marketing strategy that fits your needs while staying within your budget. Call 630-635-8000 and speak to a member of our team today.